In Highland Gaelic the mythic race or aboriginal people who inhabited Ireland and Scotland, the fomhair or famhair, were giants associated with underground places; like the mythic mouros of the Galician folklore, they were also master builders of megaliths. 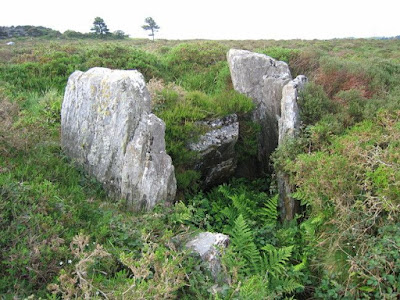 Theese three notes in common between fomorians and mouros is highlighted in the folklore and in the place names of archaeological sites: ring forts, barrows and dolmens are considered in Galicia, and in general in the North and West of Iberia, as mouro's buildings or their dwelling places. Indeed, the Irish name of the Giant's Causeway, Clochán na bh-Fomhorach, proves the identity between fomorians and giants as master builders of megaliths or cyclopean monuments (Carmichel, in Carmina Gadelica, thinks they were Titans or Cyclops, and it fits whith the one-eyed fomorians). 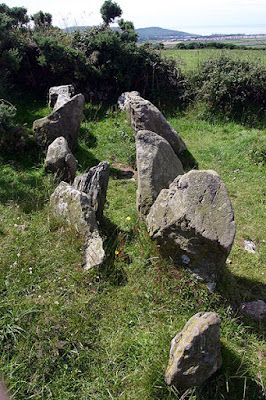 More surprising is the fact the words fomorian and mouro come from the same etymon. The numerous spellings of the first, and his meaning, suggest the eclipsis of an initial m-, from latin majorem, "great, ancestor": the suppression of the radical sound, by prefixing another sound of the same organ, like f-, doesn't occurre in writing, where both sounds are retained in Irish ortography. But in Welsh the sound eclipsed disappears in writing: maur, mor, vor, "great", from latin majorem. And in Galicia the word mouro, "giant, ancestor", from latin majorem, retains this odd meanings in folklore in spite of another identical word: mouro, "dark, moor", from latin maurum (1). 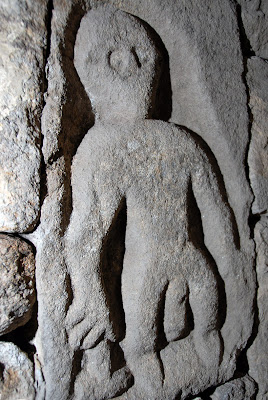 The tripartite scheme of the Irish and Galician theogony, chthonic titans (fomorians / mouros), heavenly gods (Tuatha Dé Danann / christians) and human beings or heroes (descendants of Míl Espáine) appeared first time in the Theogony, a greek poem by Hesiod (7th century BC). This fact suggests that the celtic mytholohy and the greek one came from a common old european heritage.