The Boy and the Giant - a Galician Folktale

This tale was first compiled in Galician in the book of Lois Carré-Alvarellos: Contos Populares da Galiza, Porto, 1968. It is one of the most ancient renderings of "Polyphemus" tale, the 1137 type of the classifiyng by Aarne-Thompson-Uther; Julien d'Huy considers this type, by phylogenetic reconstruction, a palaeolithic tale ("Polyphemus: a Palaeolithic Tale?", The Retrospective Methods Network Newsletter, Department of Philosophy, History, Culture and Art Studies, University of Helsinki 2015, pp.43-64).

In my view, the Galician tale adds another mytheme to the prototype, "The Cattle Raiding of the Lord of the Animals", maybe the ultimate goal of a tale of the Palaeolithic. This fits with other ancient myths, like Prometheus, who takes the gods' fire. All of this completes my hypothesis of a Lady of the Animals (potnia theron) who dwelled the prehistoric caves where she kept livestock. Her existence survived in the caves folklore and in cave art. I first exposed this theory in "Palaeolithic Cave Art through Folklore" (Arqueotoponimia, 2013). 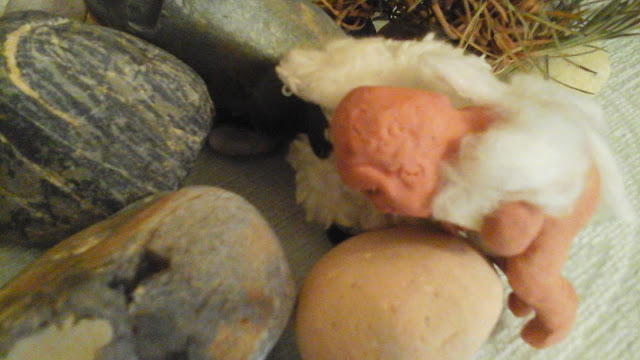 The Boy and the Giant

"Once upon a time two parents had a child. They were very poor and lived in hardship. One day the child told his mother:

-Mom! You are getting old and I will soon be a young boy. I want to travel around the world to make a fortune so that you no longer have to work.

-Oh sonny! Travelling all over the world is very expensive, it is a hard experience and you will find nowhere a love like ours- the mother said.

-I do not care. I am old enough to work and I will not rest until I make a fortune. You can fend for yourselves while I try my hand at it.

The boy then went the world ahead, as he was determined.

He asked door by door for a job only to collect some money; it was very little and, consequently, he could not come back home.

At one of his masters' house, where men from all over the world stayed, he listened to a foreigner talking about setting off on a voyage and gaining the opposite coast, where anybody could achieve their proposal before long. However, you had to face hard experiences.

Many days went by. He was hungry, thirsty and weak from rowing. Eventually he reached the coast. When he left the beach, he arrived at a green field where he fell asleep. He did not know how much time had passed; when he awoke, a giant, who was dark and very ugly, stood opposite him showing his teeth. He had nails like dog claws, and only one eye in the middle of the forehead. The boy was not afraid of him; when he saw all the fertile land and so much cattle and sheep, he thought that he had reached his destination.

-Master, do you need a servant?

-Groarrr! I want to eat you- the giant said.

-You can not do that, Sir; I am just skin and bones. If you hired me as a servant, when I get fat you will be able to eat me.

-Groarrr! Come along!- the giant said, taking the boy to a cave bigger than several houses together. There was a fabulous kitchen, with a fireplace where some cauldrons were heated by fire; an entire ox could fit in one of them. There was only a gate in the cave and the giant's body covered the entrance door.

When they made their way to the cave, the boy noticed that the giant knew everything that happened in the country because his only eye could see as well as eagles in daytime, and at night, like cats or owls.

The boy worked as a shepherd, he also cleaned the cave and cooked the meals. In a short time he started to get fat and he realised that the giant, who was always eating and sleeping, watched him closely.

At night, when the giant was sleeping his snoring made the cave shake. While the boy was cooking, he heated a spit red hot and pierced the giant in the eye. The cave smelled of roasted meat, and the giant, in pain, started crying, jumping like a fool, beating against everything.

He swore in a real scary way.

The sheep, that slept in a farmyard of the cave, were afraid, so they wanted to leave. The giant was at the door and they only could go out one after the other.

-He want to catch me- the boy thought, and took the sheepskin on his bed and covered himself with it. The boy left the cave crawling among the sheep.

When he was out of the cave he said:

-You wanted to hurt me, but I have hurt you. Take care! See you later, buddy!- the boy shouted, gathering the cattle to take away with him.